“I have successfully handled and discharged the responsibilities passed on to me by Sri Abhinava Vidhya Tirth Swamiji(35th pontiff) in 1974 and the same responsibilities I am passing on today to the new seer.”

Sri Bharathee Theertha Mahaswamiji during the occasion of anointing Sri. Vidhushekhara Bharathi as his successor designate. 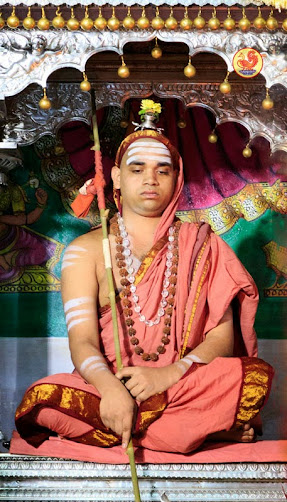 “According to Shasttras, Taking birth as a human being is a great thing. But one has to strive to make use of the opportunity.  I am blessed to receive infinite blessings of Guru and keen to lead a life aligned with Shastras.  I am happy to receive Sansyasa and I would deliver my responsibilities with the blessings of my Guru”

The 36th Jagadguru Sri. Bharathi Theertha made the announcement as ordained by Goddess Sri. Sharada, continuing the unbroken tradition of Sanatana Dharma.  When establishing this Peetham about 1200 years ago in Sringeri, Sri Adi Shankaracharya consecrated the idol of Goddess Sharada (the Goddess of Learning and Knowledge) and invoked Her divine presence and blessings to ever preside over this Peetham. Since then, the Jagadguru Shankaracharyas of Sringeri have always announced their successor only after Goddess Sharada’s divinely ordained-will is revealed to them. (Invitation to the Shishya Sweekaara Celebrations)